Does the following text sound natural in English? Can you take a look at it?

One of those books that you just can't help but have in your library for a fervent lover of ancient history. I read it in English because I couldn't find it in Italian, but I wanted to read it in my beautiful mother tongue. Some argue that in English it is much better because you can grasp the beauty of Syme's style. Actually, it is more accessible in English than in Italian, but I had liked it more in Italian. After all, I'm taking sides. He wrote "The Roman Revolution" which is a must. You do not need me to remind it because everybody knows it, considering I have several subject matter ancient history experts among friends here, whose friendship I am very proud. We are in the British context, perhaps one of the greatest historians of the Roman world, who lived and wrote in the twentieth century. He was originally from New Zealand, then became completely british "Sir" on the initiative of Queen Elizabeth. In 1938, very young, at the age of thirty, he writes a book that has become a classic, translated in Italy very late in the early 60s, during the fascism this book was not well received, among other things for its very critical tone towards Augustus. The main character of his "Roman Revolution", which begins much earlier with the Civil Wars (Marius Sulla, Caesar, Pompeius, etc.), then flows into the final battle which culminates in the year 31 BC in the battle of Actium, in which Augustus is the only winner, the last leader of a very long Roman Civil War, takes power and the only one who has the power. Ronald Syme in his work of him is very much actually influenced by Tacitus' words. There is a contemporary historian who strongly claimed that the description of Augustus is completely invented on a conjectural basis because it was built on the basis of a few hints of Tacitus, but this is not the case at all because there are ancient texts that testify to the character of Augustus. Just take a look at Suetoniu's life, lived in Hadrian's time, between the end of the first and the beginning of the second century BC, active under Hadrian in the imperial archive, who, in his book "Lives of the Caesars", comes out with remarkable materials on ethical characteristics about the Princeps Augustus or the pages of the historiographical work on the Roman civil wars, now no longer in our possession, by Seneca's father. There really is a lot to say.

When you "disagree" with an answer
The owner of it will not be notified. Only the user who asked this question will see who disagreed with this answer.
OK
Read more comments

CVFleming
23 Haz
I will give all the suggested corrections in order. - "if you are a fervent..." - "but I liked it more" -"In the end I'm taking sides" -"to remind you of it" -"everybody knows." -"I have several ancient history experts among my friends here, of whose friendship..." -"he wrote a book" -"during the fascist regime" -"He comes to power and is the only one" -"his work on him" -"is heavily influenced by..." -"He lived in Hadrian's time"

I will give all the suggested corrections in order.

CVFleming
23 Haz
@linguist94_ Not at all! Your English is great. Just keep at it. Remember that even native English speakers can improve, nobody writes perfect English (with the exception of Shakespeare, and he's been dead for a long time!).

@linguist94_ Not at all! Your English is great. Just keep at it. Remember that even native English speakers can improve, nobody writes perfect English (with the exception of Shakespeare, and he's been dead for a long time!). 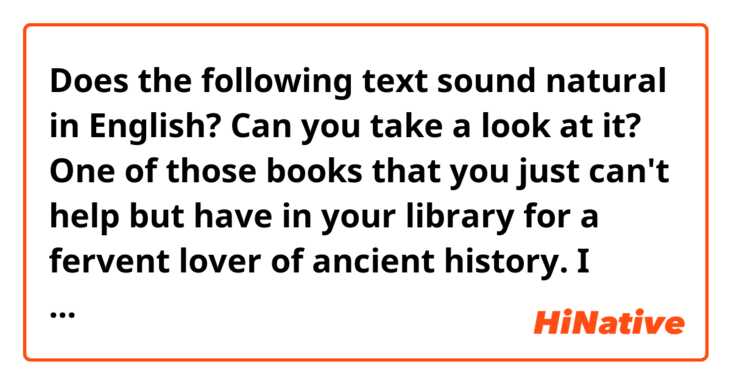